The method of steepest descent is used to minimize multivariate functions

of the iteration, first, the negative gradient

is computed, which is the best local search direction. Then, the next approximation

is determined by minimizing 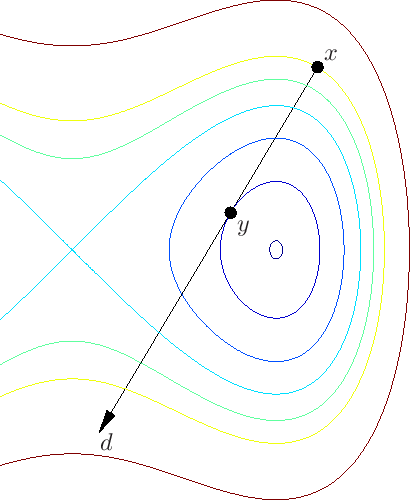 As shown in the figure, the search direction is orthogonal to the level set through

and touches the level set for a smaller function value in

The convergence of the sequence

, generated by the the method of steepest descent, can be shown under fairly general assumptions. It is sufficient that

is bounded from below and

is Lipschitz continuous in a neighborhood

These hypotheses imply that

tends to zero, and it follows that each accumulation point of the sequence

is a critical point of

. While, statistically, convergence to a local minimum is almost certain, exceptional cases cannot be excluded.

To ensure convergence of the algorithm, it is not necessary to find the exact one-dimensional minimium in the direction of

. It is sufficient to use a non-optimal decent direction

and obtain merely a reduction of the current function

value which is proportional to